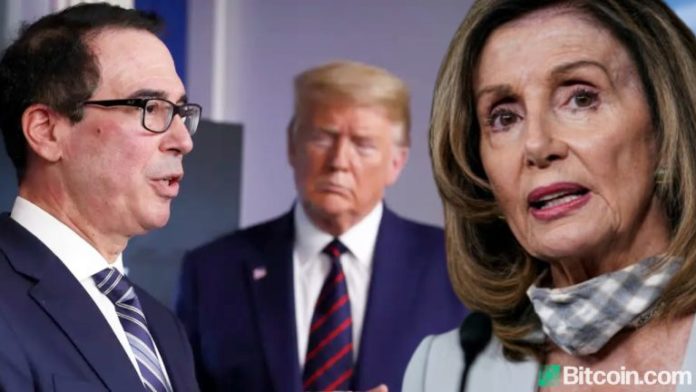 While Pelosi called her conversation with Mnuchin “a positive one,” Senate Majority Leader Mitch McConnell (R-Ky.) was less confident. He explained that the package contains many of the same provisions Republicans rejected in the previous legislation. “This latest bill from the Speaker is no more serious than any of their other political stunts going back months. If they continue to refuse to get serious then American families will continue to hurt,” he said on the Senate floor Wednesday. “I think it’s safe to say we’re far apart. I think Secretary Mnuchin and the Speaker will continue to speak but we are very, very far apart,” McConnell told reporters.

The post ‘.6 Trillion’ Stimulus Bill With Second Direct Payments to Americans Ready for Voting appeared first on Bitcoin News.
Bitcoin.com is author of this content, TheBitcoinNews.com is is not responsible for the content of external sites.

The discussion of the new stimulus bill unveiled on Monday by House Speaker Nancy Pelosi is heating up as lawmakers hope to pass an economic relief aid package before the November presidential election.

Furthermore, Mnuchin has reportedly proposed a .5 trillion stimulus package counteroffer, which he described as similar to the .5 trillion proposal developed in the House earlier this month by the bipartisan Problem Solvers Caucus, a 50-member bipartisan group. This proposal, which President Donald Trump has expressed support for, also provides for another round of ,200 direct stimulus payments to Americans. The updated HEROES Act stimulus bill introduced by Pelosi on Monday can be found here.

The new stimulus bill is an updated version of the .4 trillion HEROES Act that the House passed in May but was stalled in the Senate. Democrats expect the new stimulus bill to cost about .2 trillion, but White House senior economic adviser Larry Kudlow believes it to be an underestimate. He told CNBC Tuesday:

Provides additional direct payments, cushioning the economic blow of the coronavirus crisis with a more robust second round of economic impact payments of ,200 per taxpayer and 0 per dependent.
US lawmakers are intensely discussing a new stimulus package that could cost between .2 trillion and .6 trillion. The bill could be voted on this week as talks between House Speaker Nancy Pelosi and Treasury Secretary Steven Mnuchin heat up over the content of the bill. A compromise has not been reached at press time and Pelosi said early on Wednesday that Democrats would proceed with the voting of the bill regardless, which would allow members to leave town for pre-election campaigning. However, Democrats announced late Wednesday that the voting has been delayed to allow additional time for bipartisan discussions. Pelosi and Mnuchin will resume their talks on Thursday. Meanwhile, Congress is scheduled to be in session through early October.
We don’t think the numbers are right — .2 trillion — which is a very big number. There’s some leftover spending that’s not included there and some tax cuts that are repealed. It might come to .6 trillion.
Do you think another stimulus bill will pass before the presidential election? Let us know in the comments section below.
Since the bill was proposed, Pelosi has been in constant discussion with Treasury Secretary Steven Mnuchin regarding the content of the bill. “I say we’re going to give it one more serious try to get this done, and I think we’re hopeful that we can get something done. I think there is a reasonable compromise here,” Mnuchin told CNBC.

Among other provisions, the updated HEROES Act “Restores unemployment benefits, ensuring weekly 0 federal unemployment payments through next January and preventing unemployed workers from exhausting their eligibility,” the bill summary details. It also includes billion for coronavirus testing, contact tracing and isolation measures, along with billion for procurement, distribution and education campaigns for a safe and effective vaccine. Moreover, the bill: