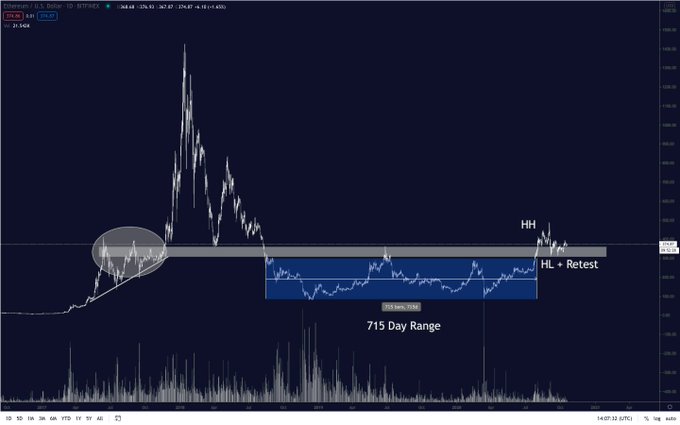 According to a Bloomberg article released on Oct. 17, Polkadot is an Ethereum blockchain killer. It is a recently-launched blockchain network that uses a network of sidechains that are customizable by developers to facilitate a much better user experience than its predecessor.
Outlier Ventures reported that the number of Polkadot developments has begun to increase, boding well for the network.
One analyst, the head of technical analysis at Blockfyre, recently shared the chart below. It shows that the cryptocurrency has recently formed two bullish macro technical signs: ETH has broken out of a 715-day range while it is forming a series of higher highs and higher lows, suggesting the formation of an uptrend.

Not to mention, Ethereum’s 2.0 upgrade is slated to begin in the near future with the rolling out of phase zero. This may drive capital into ETH as investors seek to capture the yield offered in the coin.

“$ETH Notes on Chart: 2.0 Coming, HH + HL on top of 715 day range, break PoB to ATH’s. You’re bearish? Buy + Hold + Wealth Drop the LTF bias.”
It is currently unclear how much of an effect a rising Polkadot will have on ETH. But it’s worth noting that Ethereum has faced some setbacks over recent months as the cost of transactions has increased rapidly and as the high block times have begun to limit some development.
Ethereum remains in a bullish state from a macro perspective after a strong 25% correction from the year-to-date highs, analysts say.

“While developer interest in Bitcoin and Ethereum has declined, the number of monthly active developers building on Polkadot increased by 44% in the 12 months ended in May, the report found.”

Chart of ETH’s price action over the past three years with analysis by crypto trader and head of TA at BLockfyre Pentoshi.
Source: ETHUSD from TradingView.com

While Ethereum may be strong in its own right, the coin may face competition from other blockchains that could suppress ETH upside.