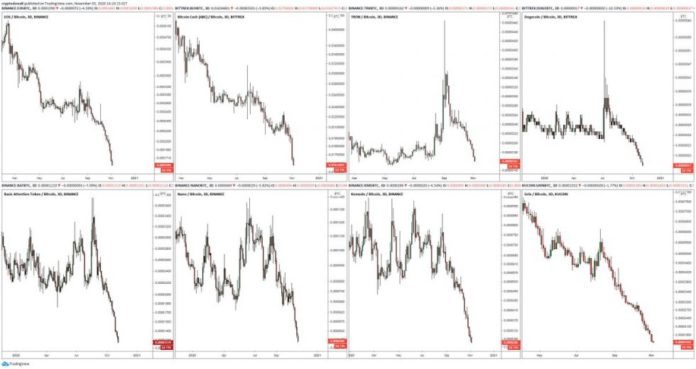 “Finally altcoin capitulation. This shit can go on for much longer than you think. Prices can go down much further than you think. Most coins will go to zero. Many people will lose it all. Some will make shitloads of money. This is what patient alt traders have been waiting for.”
One analyst called today’s altcoin selloff the first real capitulation ever seen. He notes that while prices can go significantly lower in the near-term, this is the selloff that “patient traders” have been waiting for.
Bitcoin is showing immense signs of strength today, with the cryptocurrency breaking above its ,000 resistance level as it shows no signs of slowing down anytime soon.
Many smaller tokens are trading down 80% or more from where they were just a few months ago. This intense selloff has erased all the gains that smaller tokens saw due to the recent DeFi bull run this past summer.
Most altcoins are actually trading down today, not gaining ground against either Bitcoin or USD.

This ongoing upswing is coming about in the absence of any strength across the aggregated crypto market.
At the time of writing, Bitcoin is trading up over 7% at its current price of ,200. This marks a massive surge from its recent lows of ,500 that were set yesterday.
This immense strength has allowed it to shatter multiple resistance levels, putting a move to all-time highs on the table in the near-term.

Despite this strength, the sentiment surrounding Bitcoin remains incredibly low, which may be due to the massive weakness seen in the altcoin market.

One trader is calling this the final capitulation.
Image Courtesy of DonAlt. Source: TradingView.

The coming few days should provide some serious insights into the altcoin market, as continued losses against Bitcoin could spark a prolonged downturn.