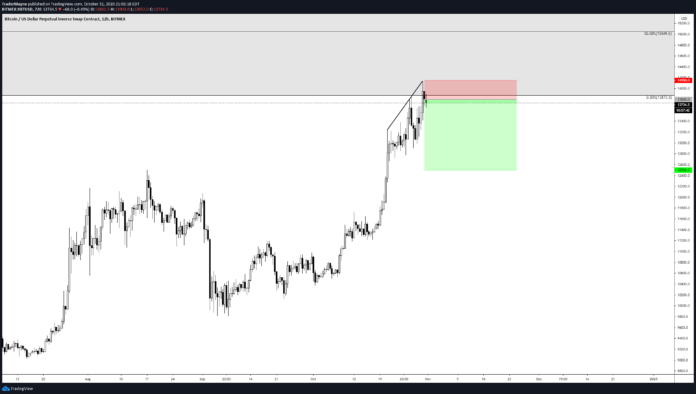 “Short again on $BTC, something about this weekend pump seems fishy. 3 drives-ish into major resistance, stocks shit the bed last week, election early next week, solid RR and $DXY on support. Still bullish overall, pull backs aren’t a bad thing. Let’s see what happens.”
The trader added that once retail investors enter the Bitcoin market, the price of the coin may surpass ,000.

“I do think we will see an all-time-high price for #Bitcoin before 2020 is over. Even though the price has climbed from 10k to almost 14k in less than a month, it hasn’t really gone on a breakout run yet. When we start to see 3-5k surges then the bulls will be on the run.”
The chart below was shared just recently, showing that BTC has formed “three drives into major resistance” and may thus face a pullback if a followthrough doesn’t take place. The analyst added that with uncertainty in the stock market and with the U.S. Dollar Index on support, BTC has a good chance at moving lower as opposed to higher:

The Winklevoss Twins think that the trend of inflation will drive Bitcoin dramatically higher in the months and years ahead.

Crypto-asset analyst “Light” recently shared the comment below. He thinks that much of the “buy pressure that is competing for tightening BTC sell-side liquidity these last weeks is coming from institutionals.”
Analysts also remain bullish due to macro fundamental reasons.

“A lot of the buy pressure that is competing for tightening BTC sell-side liquidity these last weeks is coming from institutionals. They are buying from people who are in the disbelief stage. The retail segment is not overheated whatsoever currently. It will be soon though.”

Chart of BTC’s price action over the past few weeks with analysis by crypto trader Mayne (@TraderMayne on Twitter).
Source: BTCUSD from TradingView.com

Analysts fear that Bitcoin is primed to retrace as the price action has tapered off after the ,000 break on Saturday.