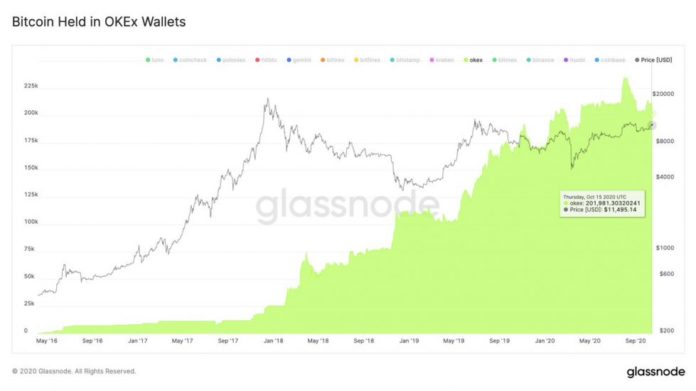 One analytics firm explained that data suggests there’s currently 200,000 BTC locked within the platform in a recent tweet.
This is a staggering number, and the impacts of this either being permanently locked or seized by the Chinese government has created some fear amongst investors.
In a post published just hours ago, the platform details how he regularly has to conduct withdrawal authorizations, with the latest one – which would normally occur today – not occurring due to him still being in police custody.
OKEx is one of the largest crypto trading platforms in Asia, alongside Huobi and Binance.

This has caused all the crypto within the platform to be locked, although users can still trade.

Last night, news broke that the founder of the platform had been arrested by Chinese authorities and can no longer conduct any withdraw authorizations due to him being the only key holder for the exchange’s wallets.
Information surrounding the arrest of the OKEx founder is somewhat limited at the time, with some reports suggesting that he was arrested weeks ago.

Some investors are concerned that this will represent a new wave of regulatory crackdowns in China and strike a blow to Bitcoin investors and traders who were using the platform.

Bitcoin’s price has been facing heightened selling pressure throughout the past few hours due to recent news surrounding the arrest of the OKEx founder.
“According to our data, around 200,000 BTC (1.1% of the circulating Bitcoin supply) are currently held in OKEx wallets. That is around .3 billion worth of BTC stored in the exchange’s vaults.”