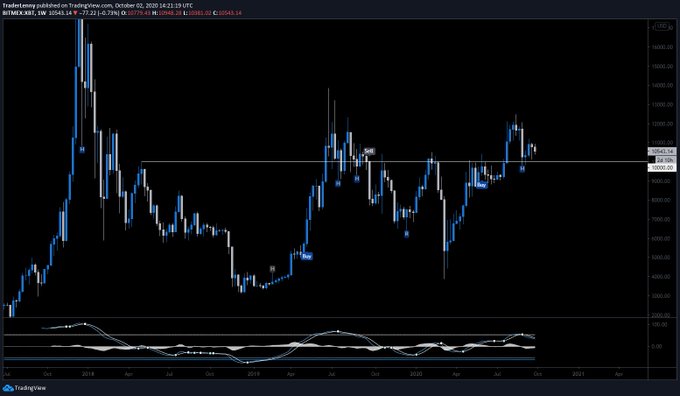 Bitcoin is down this handful of percentage points despite three fundamental news events that would have sent the cryptocurrency reeling in 2018 or in 2019. These news events are as follows:
Bitcoin currently trades for ,550, down a handful of percentage points from the weekly highs near ,000.  While this price performance is far from bullish, analysts say that it is an extremely positive sign in the macro context.

It’s worth noting that altcoins have not held up as well as Bitcoin has. Top altcoins, including Ethereum, are down over 10% from their local highs while BTC has only slipped 3-4%. Responding to Bitcoin’s resilience in the face of these pivotal news events, one trader shared the chart below:
First and foremost, the cryptocurrency topped at ,500 across three separate rallies over the past 12 months. Secondly, ,500 is where the monthly candle of June 2019 topped, suggesting it is an important technical level for Bitcoin to hold.
Featured Image from Shutterstock
Price tags: xbtusd, btcusd, btcusdt
Charts from TradingView.com
Bitcoin Didn’t Plunge Despite 3 Bearish News Events—and That’s Bullish