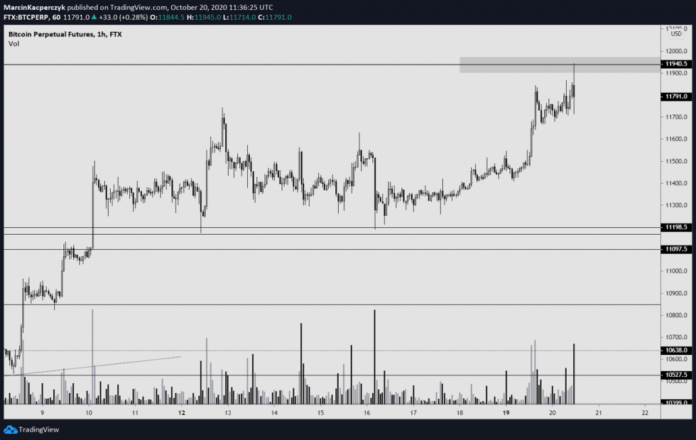 Bitcoin and the entire cryptocurrency market are beginning to witness heightened volatility once again.
At the time of writing, Bitcoin is trading up just over 1% at its current price of ,900. This is around the highest price it has been since it first declined below ,000 months ago.
One analyst believes BTC will see some choppy price action before it can break ,000.
Throughout the past two weeks, Bitcoin had been caught within a tight consolidation phase as its price traded between ,200 and ,600.

This firm trading range has since been broken, and BTC is now on the cusp of pushing past its key ,000 resistance.
Image Courtesy of Cryptorangutang. Source: BTCUSD on TradingView.

One analyst expects the benchmark cryptocurrency to see further upside, but he notes that altcoins are growing incredibly weak.

It should also elucidate whether or not altcoins will continue bleeding as Bitcoin rallies.
Bitcoin’s current uptrend is occurring during an all-around bloody day for the crypto market, as many altcoins have shed a significant amount of their value as BTC pushes higher.

Today, BTC has pushed up towards ,000 in a sharp move that came about unexpectedly. This move sucked a significant amount of capital away from altcoins, causing many to plunge as BTC rallied.

The price action seen as of late is clearly bullish, and Bitcoin is showing signs of breaking its correlation to the global equities market.
“Now back to chopping around for a bit, maybe have some bears call for doom again. BTC is looking really good, alts are looking really weak. And we didn’t even properly break out yet,” he said.
Featured image from Unsplash.
Charts from TradingView.