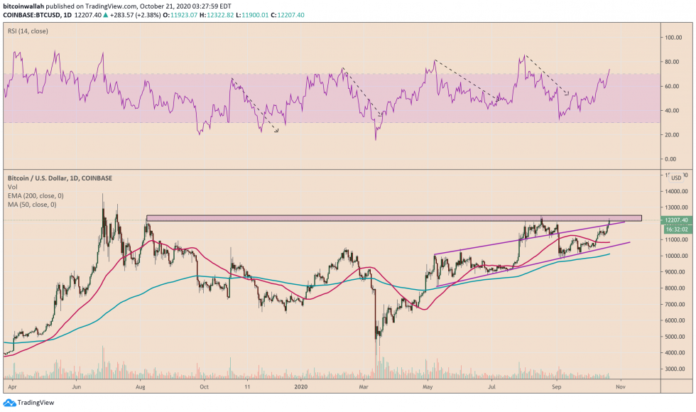 A pseudonymous analyst on Twitter posted a relatively balanced outlook on the Bitcoin market. He stated that the cryptocurrency had every chance to sustain its uptrend above ,000. Nevertheless, he further noted that a correct below the said level would put Bitcoin en route to ,150 – a support target.
“Square only bought million worth of bitcoin. They’re going to panic buy more. And eventually, [Apple] will panic buy. Holding and rolling short duration fiat-denominated fixed income “cash-equivalents” is financially irresponsible due to inflation.”

My preferred scenario would be for #bitcoin to go straight to k from here.
Reaching that level would likely set up for really good alt coin buying opportunities and set a really strong trend going forward.
I’m really getting tired of the chop.

Bitcoin trade setup in the short-term, as presented PostyXBT. Source: XBTUSD on TradingView.com
BTC/USD was trading near ,200 at the time of this writing, up 2.33 percent into the Wednesday session.

“I’ve been bullish above ,150 but approach such a key level of resistance is bringing out my bear market PTSD,” the analyst added.

Bitcoin RSI fractals in recent history and their influence on price. Source: BTCUSD on TradingView.com

The readings on Bitcoin’s 14-day Relative Strength Index pushed above 70, a level above which an asset’s bullish trend is considered overstretched. While that does not signify a price crash, it certainly indicates that the crypto may undergo consolidation or a minor retracement at best.

In early February 2020, the RSI level had peaked at 74.33 that later followed a huge slide – from ,522 to as low as ,858. Meanwhile, the overbought cases that followed later saw Bitcoin trading in a sideways range, with a bias towards bulls. That left the cryptocurrency in a conflicted scenario as its price attempts to hold ,000 as support.

Meanwhile, Bitcoin advocated Pierre Rochard focused on the fundamental end of the cryptocurrency. He recalled the recent investments of major institutions into Bitcoin (MicroStrategy, Square, etc.), adding that more firms would “panic-buy” the cryptocurrency against their non-yielding cash investments. Excerpts: 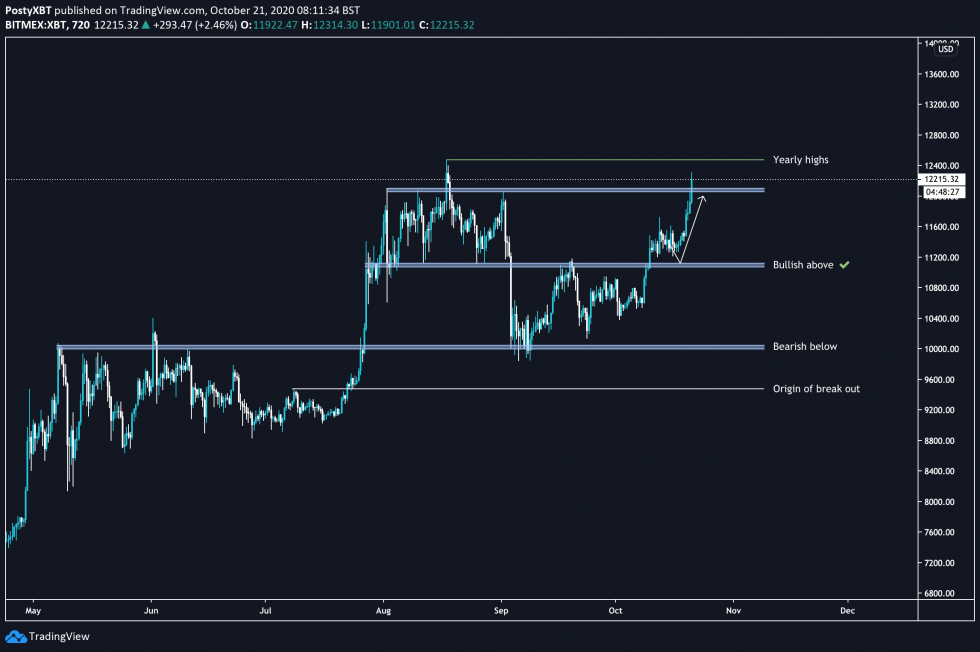 Some analysts expected the Bitcoin price to climb further upwards despite its overbought status. A pseudonymous one expected BTC/USD to march towards ,000, almost a thousand dollars above its 2019 high.

Bitcoin fractal from 2017, showing its rally above the K-support. Source: Logan Han

Bitcoin rose above ,000 on Wednesday for the first time since August 2020 but signaled an imminent price correction as it entered a so-called “overbought” area.

Logan Han, a daytrader-cum-market analyst, also envisioned Bitcoin at ,000, its previous record high, if the cryptocurrency manages to hold or consolidate above ,000.