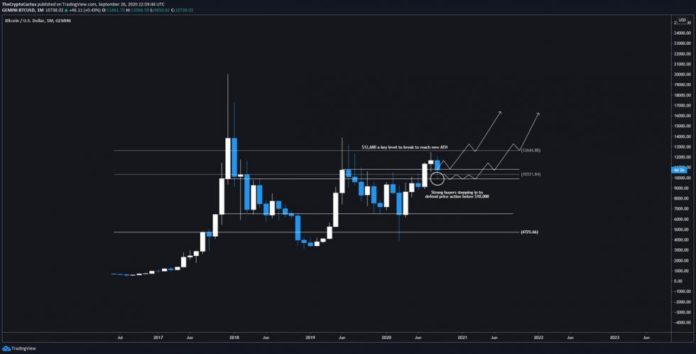 Yesterday, bulls attempted to take control of its near-term trend when they pushed it up to highs of ,800. This is around where its price began stalling, and where it ultimately faced a rejection that sent it down to lows of ,600.
Its current trading range exists between ,500 and ,800. Which of these levels is firmly broken above or below first should provide investors with significant insights into its near-term outlook.
He does note that it may first enter an “accumulation range” within the ,000 region.

Trader: BTC’s Market Structure Suggests It Is Poised to Move Towards $12,600

While sharing his thoughts on where Bitcoin may trend in the near-term, one analyst explained that he still believes a mid-term movement to ,600 is imminent.

“BTC Monthly Outlook: Depending on monthly close, either we see some type of accumulation in the 9000’s range before we end up eventually break above ,500 and flip that key level… Anyways, ,600 gets broken at some point in the next 6 months and I think we see new ATH’s.”

While sharing his thoughts on where Bitcoin may trend in the near-term, one analyst explained that although he is anticipating some short-term turbulence, he still expects it to rally higher in the mid-term.