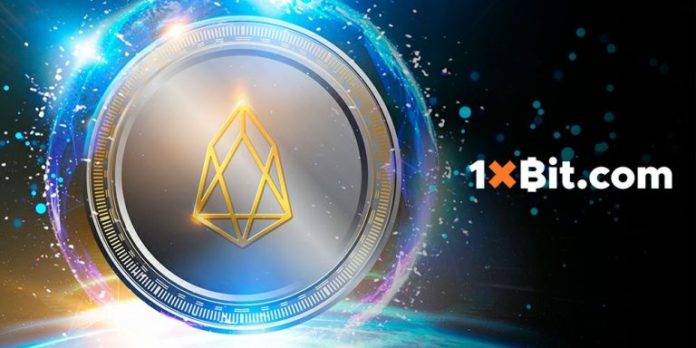 1xBit is known as an advocate of crypto adoption, and supports an impressive 25 different cryptocurrencies including EOS, BTC, ETH, LTC, DASH, SIA, ZCASH, TRON, USDT, XRP, and many more.

Unlike other popular cryptocurrencies like BTC and ETH that come with costly transaction fees, EOS transactions do not require the sender to spend any gas. Instead, EOS users all share a communal network bandwidth connection, and use a small amount of RAM via their computers to run the network.
1xBit also features popular video games including League of Legends, Fortnite, FIFA, StarCraft II, Warcraft, Valorant, CS: GO and Dota2.
Check out the official 1xBit blog for the latest articles – https://1xbit.com/blog/

1xBit has a huge range of great features that have helped the site continue to grow in size and popularity over the last 5 years. Most recently 1xBit added a feature called ‘Live Betting’ that allows players to watch a sports game or play with a real human casino dealer in live, whilst placing bets in real time.
1xBit has developed an extensive list of sports betting options to keep up with a recent increase in demand. Sports titles include Football, Australian Rules, American Football, Greyhound Racing, Chess, Basketball, Golf, Baseball,, Snooker, Horse Racing, Special Bets,Greyhounds, and much more.
1xBit is the source of this content. This Press Release is for informational purposes only. Virtual currency is not legal tender, is not backed by the government, and accounts and value balances are not subject to consumer protections. Cryptocurrencies and tokens are extremely volatile. There is no guarantee of a stable value, or of any value at all.

Players previously hamstrung by costly BTC and ETH transaction fees can not deposit and withdraw large sums without the worry of losing a chunk of their hard-earned winnings. By listing EOS on its Sportsbook and Casino platform, 1xBit not only benefits its player specifically, but also continues its reputation as a pioneer for the mainstream adoption of cryptocurrency, and blockchain.
In addition to transaction savings, EOS users will not have to wait very long for their deposits or withdrawals to process, as the EOS blockchain is capable of processing up to 4000 transactions per second. For some context, EOS competitor and second biggest cryptocurrency (by total market capitalization) ETH currently averages just 15 transactions per second.
The post Crypto Adoption Advocate 1xBit Adds EOS to Its Sportsbook and Casino appeared first on Bitcoin News.
October 8th 2020, Limassol, Cyprus – 1xBit Casino Sportsbook has announced its support for one of the markets hottest cryptocurrencies, EOS. The PoS (delegated-proof-of-stake) token is used on the EOS platform for developers to build Dapps, but also offers the everyday user a rapid, free transfer of value. With these efficient attributes at the core of the EOS token, 1xBit instantly saw a great use-case for its service, and great benefits for its loyal community of players.
For more information about 1xBit, please visit – https://1xbit.com/
Contact name: Anastasia Semenova
Best known for its huge range of slots games, 1xBit boasts classics like Great Panda and Rise of Egypt backed, which are backed up by new sensations like Battle Maidens, Knights of Magic and Dragon Tiger. 1xBit also offers both classic and modern variations of traditional casino games such as Roulette, Poker, Baccarat and Blackjack.
1xBit offers a flexible casino and sportsbook experience, with a huge selection of games, Live Betting, a 7BTC sign-up bonus and continued support for the latest and most efficient cryptocurrencies around. Sign up for your 100% bonus today and take advantage of the new free EOS transactions.
Founded by professional sports and casino gamblers 1xBit is a next generation cryptocurrency betting platform that combines sports betting with an online casino, creating a one-stop-shop gambling destination. The website caters for a broad community of different players, from recreational casino gamblers to professional sports gamblers.
1xBit has a broad range of games that cover everything from classic casino titles, sports betting, national sports, slots, e-sports, Live-betting and lotteries.
In addition, the site has weekly prizes, no ID sign-up, provably fair games, free and instant deposits and withdrawals, bet insurance,, a bonus points system for placed bets, rapid withdrawals, Android & iOS designed games, and no less than 25 supported currencies.
1xBit has a constantly-running 100% sign-up bonus with a massive 7BTC limit running now.
Email: [email protected]
Media Contact Details