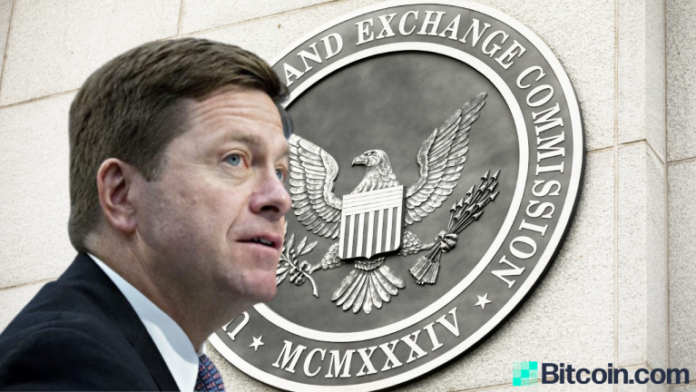 Clayton pointed out that the utility of the token is what decides which regulator should take the lead. While banking regulators should supervise tokens meant specifically for making payments, such as some stablecoins, Clayton said the tokenization of ETFs should be under the purview of the SEC. Emphasizing that the SEC should and is willing to regulate them, he said:

SEC Open to Tokenization of ETFs

“There was the theory that because it was so efficient because it could have so much promise, we could toss aside some of those principles of responsibilities and transparency,” he recalled. The chairman now says: “We are seeing the promise of blockchain technology, distributed ledger technology, bring efficiencies to what I say is time-tested framework.”
Our door is wide open, if you want to show how to tokenize the ETF product in a way that adds efficiency, we want to meet with you, we want to facilitate that. Of course, you got to register it and do what you would do with any other ETF.
The SEC chairman continued: “What we don’t like is when someone says, ‘you know the function is payments so you really ought to look past the securities law stuff.’ I can’t do that, you know, I wouldn’t be doing my job.”

Wisdomtree Investments CEO Jonathan Steinberg said during a separate panel at the same event that tokenized investments are “an opportunity to do something better than the ETF.” Franklin Templeton Investments filed paperwork with the SEC last year for a government money market fund with both traditional and tokenized shares, the publication conveyed.

What do you think about Clayton’s view? Let us know in the comments section below.
One of the areas Clayton and Brooks have been discussing is how to clearly define what a security is. “If you’re not trying to finance your network, you’re not trying to give people a return on your network, it’s probably not a security,” the SEC chairman clarified. “But if what you are trying to do is finance the build out of your network with your token or provide people with a return for using the network with your token … it’s pretty clear it’s a security.” He added, “we are working to make it clear where those lines are so people can mature the payment system.”
The post Cryptocurrency ETFs: SEC Wants to Facilitate Tokenized Products appeared first on Bitcoin News.

The U.S. Securities and Exchange Commission (SEC) wants to facilitate tokenized exchange-traded funds (ETFs), according to chairman Jay Clayton. The agency is collaborating with other U.S. regulators to determine how to regulate different crypto products.

Bitcoin.com is author of this content, TheBitcoinNews.com is is not responsible for the content of external sites.
“Tokenisation allows a designated cryptocurrency asset — similar to bitcoin [BTC] — to represent a single security, such as a stock, or a basket of securities, like a fund or an ETF,” the Financial Times explained.
Clayton claims that the SEC’s regulatory framework “is time tested … through many innovations.” Noting that trading today is electronic and traders use digital entries rather than stock certificates like they used 20 years ago, he asserted, “It may be very well the case that those all become tokenized.” However, the chairman warned, “But you have to stay true to the principles,” adding that stock issuers and insiders, for example, all have responsibilities. He described:
The SEC is “actively working on regulations that might one day permit crypto versions of ETFs,” the Financial Times reported Friday, citing Clayton. The SEC is collaborating with other U.S. regulators, such as the Office of the Comptroller of the Currency (OCC) and the Commodity Futures Trading Commission (CFTC), to determine which regulator has jurisdiction over different crypto products.
One of the problems that we had was we got off on the wrong foot in this innovation … I think now, three years later, four years later, we are in a much better spot.

SEC Chairman Jay Clayton talked about the commission’s approach to regulating crypto products during a panel discussion hosted by the Chamber of Digital Commerce earlier this month. The event, entitled “Two Sides of the American Coin: Innovation & Regulation of Digital Assets,” also features acting Comptroller of the Currency Brian Brooks.