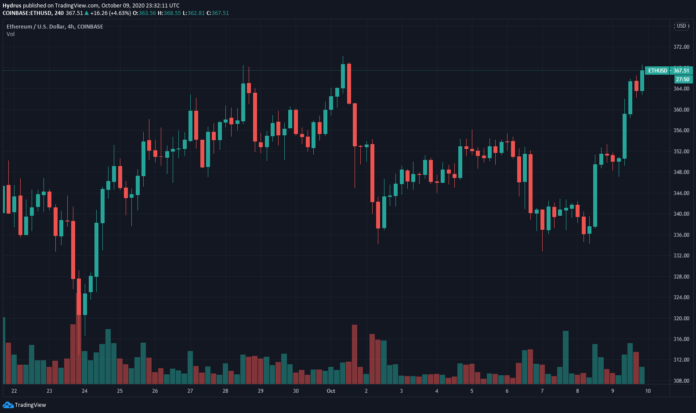 ETH needs to decisively pass and test this level as support this level if it is to continue decisively higher. Fortunately, the cryptocurrency is in the midst of breaking to the upside of a falling wedge pattern. A falling wedge is a textbook bullish pattern that often precedes upside. The restarting of stimulus discussions in such a short period of time led the U.S. dollar lower after a relief rally. The dollar dropped by just under a percent in the past 24 hours, driving all markets higher, especially cryptocurrencies and gold.
Featured image from Shutterstock
Price tags: ethusd, ethbtc
Charts from TradingView.com
Ethereum Surges Towards 0, Denying Expectations of Further Losses

Ethereum is currently on its way to 0 as of this article’s writing. The coin is up 5% in the past 24 hours, outperforming Bitcoin and other large-cap cryptocurrencies as the market seemingly turns risk-on once again.
Ethereum is currently rubbing up against important resistance levels: 5-375 is a technical region that has acted as a point at which a number of rallies have topped over recent months.
Chart of ETH’s price action over the past few weeks from TradingView.com

This ongoing move higher seems to have been triggered by news that the U.S. is actually pursuing a stimulus bill just a few days after President Trump told Capitol Hill politicians to stop discussions. It has been reported that a .8 trillion stimulus bill is being worked on by the House. This is below the .2 trillion bill passed by House Democrats last week but still far more than no stimulus at all.