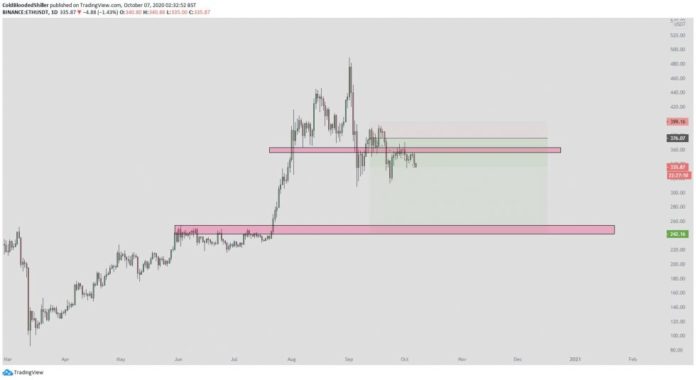 Where the cryptocurrency trends next will undoubtedly depend on Bitcoin, as the benchmark crypto has been firmly guiding the aggregated market throughout the past few weeks.
This sideways trading may not last for too much longer, as one analyst is noting that a bearish market structure formed by ETH indicates that a move down towards 0 is imminent in days and weeks ahead.
At the time of writing, ETH is trading down marginally at its current price of 1. This is around where it has been trading throughout the past day.

Ethereum and other altcoins were driven slightly higher this week by Bitcoin’s rebound past ,700. This rebound has since stalled, which is what caused ETH to plunge from over 0 down to lows of 0.
Image Courtesy of Cold Blooded Shiller. Chart via TradingView.

Ethereum has had a rough past few weeks, with its price forming an incredibly wide trading range between 5 and 0, while its buyers and sellers reach an impasse due to Bitcoin’s persistent bout of consolidation.

Analyst: ETH has an “Abysmal” Outlook, Decline Towards $240 is Imminent

“ETH short average has been brought down with the add at 7. It just looks abysmal (which is great for me). Approaching a month in the short position which was to be expected for this move. Very pleased I’ve been positioned and not having to play with the chop.”

If it moves lower from here, the next support region to watch exists between 5 and 5, as this is where it has bounced in previous weeks.

While speaking about Ethereum’s near-term outlook, one analyst explained that he is expecting the cryptocurrency to see a move down towards 0 in the near-term.
Featured image from Unsplash.
Charts from TradingView.