In a tweet published Tuesday, US President Donald Trump broke off talks with congressional Democrats on the second coronavirus fiscal package until after the November 3 presidential election.
Bitcoinist.com is author of this content, TheBitcoinNews.com is is not responsible for the content of external sites.

His comments raised the appeal of the US dollar and US dollar-based instruments among investors. Later, Mr. Trump’s statement on the stimulus aid fueled the greenback higher.

The San Francisco-based cryptocurrency exchange cited data from IntoTheBlock, a blockchain intelligence platform, that painted Bitcoin’s two out of seven on-chain fundamentals as bearish – and the rest as neutral.

Nevertheless, after Mr. Trump joined other Republicans on a call, he called a halt to the talks with Democrats. His message read:
“Nancy Pelosi is asking for .4 trillion to bail out poorly run, high crime, Democrat States, money that is in no way related to COVID-19. We made a very generous offer of .6 trillion and, as usual, she is not negotiating in good faith.”
Putting a halt on the aid impacted the rest of the money injection cycle, also confirmed the Fed chair Jerome Powell on Tuesday in his address to the National Association for Business Economics. He asked the US Congress to introduce the second stimulus or risk crashing the US economy.
“The two “bearish” metrics [concern] the number of active Bitcoin addresses and the number of large BTC transactions,” read the OkCoin report. “IntoTheBlock data suggests that the number of active BTC users has decreased, as has the number of transactions over 0,000.”
The reason Bitcoin slipped is that all markets – from stocks to commodities – earlier rallied because of a combination of expansionary policies introduced by the Federal Reserve and the US Congress. That included a trillion stimulus aid, a near-zero interest rate, and an open-ended purchasing of US Treasurys and mortgage-backed securities.
OKCoin’s statements followed an overnight sell-off in the Bitcoin market as negotiations for further stimulus aid to the US economy met an abrupt resistance.

Over the weekend, Mr. Trump had appealed for a deal. The Democratic speaker of the House of Representatives, Nanci Pelosi, confirmed on Sunday that the negotiations with the Treasury Secretary Steven Mnuchin were going in the right direction. Simultaneously, Bitcoin was rising higher on hopes of a finalized deal. 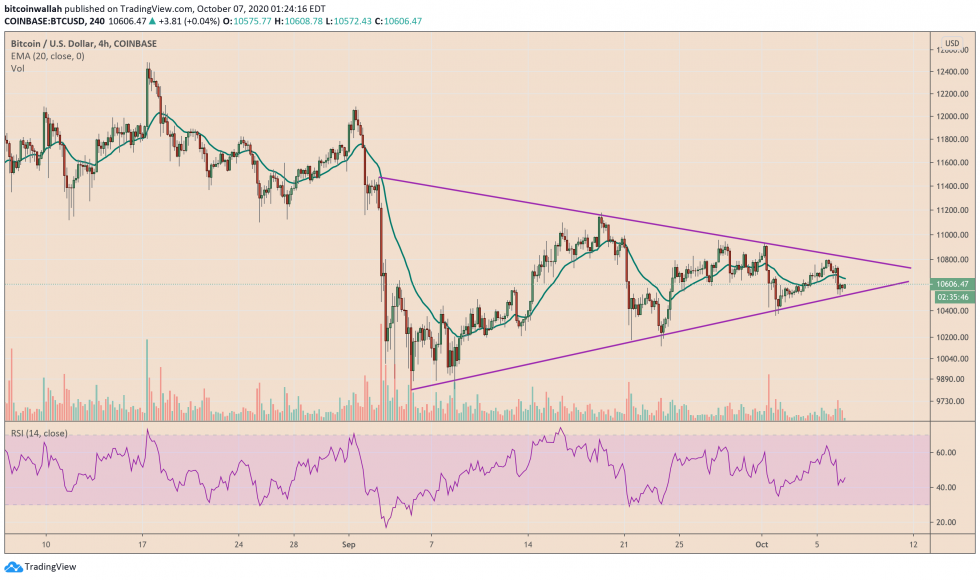 “Temporarily stopping stimulus talks marks a medium-term setback for bitcoin,” it noted. “However, it is expected that further fiscal stimulus will be passed once the negotiations resume.”

But the ongoing trend may not sustain, said OKCoin.
Hans Hague, the head of quantitative strategy at Ikigai Asset Management, also predicted a long-term bull trend for Bitcoin. It is because of macro trends that indicate that monetary inflation will continue.
Bitcoin, in tandem with the rest of the risk-on market, plunged right after Mr. Trump’s statement.

BTC/USD was trading at ,615 at the time of this writing.

Bitcoin is bracing for a bearish impact in the short- to medium-term, according to OKCoin.
Bitcoin manages to sustain above ,500-support. Source: TradingView.com
Unless he reverses the decision, it means that many American people, including those hit by business closures and unemployment, could face financial issues in the coming months.

The Fed raised its inflationary outlook beyond its previous 2 percent target at the beginning of September.