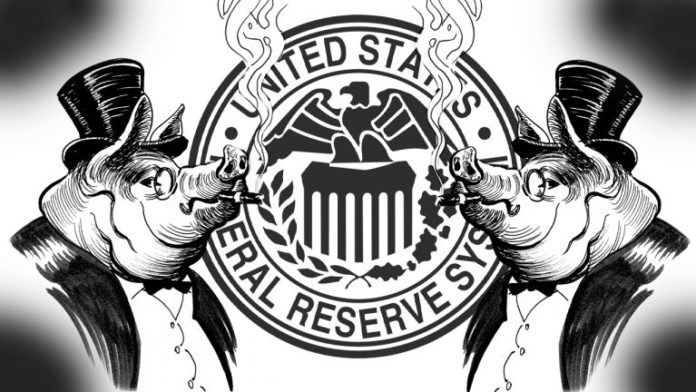 Meanwhile, MSM rags continue to claim Americans should be grateful that the Fed has allegedly “prevented a US economic collapse.” Rather, the Fed has managed to create trillions for the revolving door of fascist bankers from the comfort of their own mansions. When it comes to corporate and banker bailouts, the Fed certainly hasn’t missed a step.
“We are all largely working remotely. Most of the banks and branches have very limited staffing, if any,” Randal Quarles, the Fed’s Vice Chairman detailed during a recent webinar discussion. On October 22, Mary Daly the San Francisco Fed President claimed that Federal Reserve employees “haven’t missed a step” this year.
While American citizens wait for bureaucrats to pass a new coronavirus relief package, the Federal Reserve has continued to serve corporate interests and the banking cartel. Behind the curtains from the comfort of their own mansions, members of the Fed have given more stimulus to crony Wall Street corporatists than it did in 2008. The U.S. central bank’s monthly rounds of stimulus have effortlessly surpassed the quantitative easing (QE) tactics that followed the United States’ subprime mortgage crisis.
“Imagine that your neighbor across the street had been criminally charged with five felony counts for financial crimes in the past six years and admitted to committing each and every crime to the U.S. Department of Justice. Would you put one-third of all of your money in a safe, give that neighbor the combination, and ask him to hold the safe in his house for you?” the Martens ask in jest.
Ahead of the presidential election, the Fed is still purchasing billion a month in mortgage-backed securities and billion per month in Treasuries. The net of redemptions outpaces the 2008 bailouts and the QE from 2012 through 2014 as well.
Additionally, Porter’s letter highlights a serious conflict of interest between the Fed and the firm Blackrock. Essentially, the letter stresses that the “[Federal Reserve’s] decision to buy corporate debt with taxpayer dollars directly benefited Wall Street and the world’s richest corporate executives.”
With well over trillion in stimulus injections, the Fed’s 2020 USD pump eclipsed more than two centuries of the country’s dollar creation. Estimates say, in just a mere eight months in 2020, the U.S. has created 22% of all the USD issued since the birth of the nation.

Meanwhile, while most Americans haven’t even blinked over the central bank’s massive money creation, mainstream media continues to dangle talks of a stimulus package for the average citizen.
The post Federal Reserve Staff Sluiced Wall Street Bankers With Trillions From the Comfort of Their Mansions appeared first on Bitcoin News.
“You would probably be suited up for a straight jacket if you did something like that,” the Martens insist. “That’s effectively what the Federal Reserve, the central bank of the United States, has done when it comes to JPMorgan Chase.”
The financial columnists also published the U.S. Representative for California, Congresswoman Katie Porter’s recent letter to Fed Chair Jerome Powell, and the Board of Governors. Porter writes that the Federal Reserve “is using billions of taxpayer dollars to purchase the debt of banks like JPMorgan Chase.”

The talks of looming stimulus for the average American citizen has been a revolving farce passed around the headlines mainstream media (MSM) publishes every day. Massive rounds of stimulus are happening with QE-style debt purchases but a carrot is being dangled in the air by the media with these talks of relief packages. One MSM outlet actually praised the Fed members this week for working remotely from home.
On Friday, the Fed dropped the threshold for the Mainstreet Lending program as the bank lowered the threshold for certain businesses. At the same time, the Fed has commissioned JPMorgan Chase with trillion in bonds, according to data collected by the investigative financial journalists’ Pam Martens and Russ Martens.
What do you think about the Federal Reserve’s so-called courageous efforts? Let us know what you think about this subject in the comments section below.