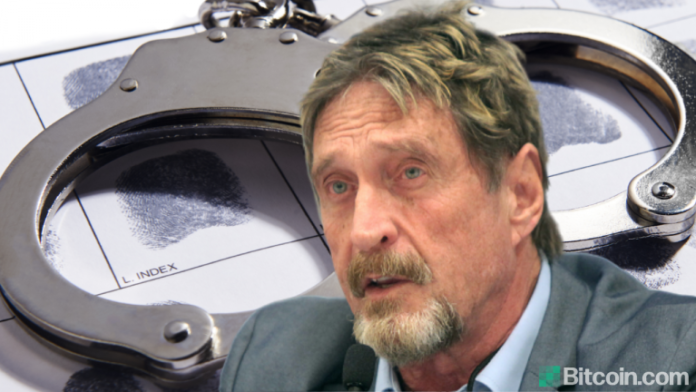 According to the SEC, the antivirus software pioneer did not disclose that he was being paid to promote the tokens, which constitutes “unlawful ‘touting’ and violates the federal securities laws.” Emphasizing that “The ICOs at issue involved the offer and sale of digital asset securities and McAfee’s recommendations were materially false and misleading for several reasons,” the SEC detailed:

McAfee was paid bitcoin (BTC) and ether (ETH) worth more than .6 million, plus an additional .5 million worth of promoted tokens, as undisclosed compensation for his promotions of seven ICOs. McAfee paid Watson at least 6,000 for his role.
Meanwhile, the DOJ unsealed an indictment Monday charging McAfee “with tax evasion and willful failure to file tax returns.” According to the announcement, “The June 15, 2020 indictment was unsealed following McAfee’s arrest in Spain where he is pending extradition.” On Sept. 28, the two-time presidential candidate tweeted that he “Went to Spain this weekend to check the progress of the Mud Wrestling Arena I’m building.”
His paid promotions were exposed by a blogger in February 2018, rendering his tweets useless for pumping more ICOs. However, he still held “a large number of virtually worthless securities from the ICOs he had previously touted,” the SEC continued, adding that he then paid a third party to pump these tokens and encouraged investors to buy them without disclosing that he was trying to dump his own stash.

McAfee has made no secret that he is not paying taxes. “Tax evasion is [a] misrepresentation of income. I have never done that. I merely refuse to pay,” he tweeted in February. Moreover, news.Bitcoin.com reported in January 2019 that McAfee had fled the U.S. and was living in exile on a boat after he was charged with “using cryptocurrencies in criminal acts.”

The ICOs McAfee touted raised at least approximately million and McAfee made approximately .2 million in secret compensation for his touts.
The SEC seeks to order the defendants “to disgorge all ill-gotten gains” and “pay civil monetary penalties.” The agency also seeks to permanently prohibit McAfee from serving as an officer or director of certain companies and the defendants from participating in the issuance, purchase, offer, or sale of any digital asset security.
The post John McAfee Arrested, Indicted for Million Illegal Crypto Pumping and Tax Evasion in US appeared first on Bitcoin News.
Watson was McAfee’s bodyguard, who “substantially assisted McAfee’s touting and scalping schemes,” the SEC alleges, adding:

The SEC has charged the 74-year-old antivirus software tycoon and his bodyguard Jimmy Watson Jr. with fraudulently pumping initial coin offerings (ICOs). The agency explained that from at least November 2017 to February 2018, “McAfee leveraged his fame to make more than .1 million U.S. dollars (‘USD’) in undisclosed compensation by recommending at least seven ‘initial coin offerings’ or ICOs to his Twitter followers.” He had approximately 784,000 Twitter followers at the time; that number has significantly grown to about a million at press time.
If convicted, McAfee faces a maximum sentence of five years in prison on each count of tax evasion and a maximum sentence of one year in prison on each count of willful failure to file a tax return.

McAfee has been aware of the SEC watching him for quite some time. In December 2018, he tweeted: “Folks are warning me against opposing the SEC and point to Elon Musk’s submission to them as an example I should follow. I have had many dances with the SEC. I know who they are, and I am not Elon Musk – I’m John Fucking McAfee. Watch the difference.”
The SEC also noted that McAfee “lied to investors by falsely denying he was being paid by the issuers” when directly asked if he was being paid to promote the coins.
John McAfee has been arrested and indicted for tax evasion, the U.S. Department of Justice announced. The cybersecurity entrepreneur has also been charged with fraudulently pumping cryptocurrencies by the U.S. Securities and Exchange Commission.

The DOJ explained that McAfee failed to file tax returns from 2014 to 2018 despite receiving “millions in income from promoting cryptocurrencies, consulting work, speaking engagements, and selling the rights to his life story for a documentary.”

“McAfee allegedly evaded his tax liability by directing his income to be paid into bank accounts and cryptocurrency exchange accounts in the names of nominees,” the announcement notes. “The indictment further alleges McAfee attempted to evade the IRS by concealing assets, including real property, a vehicle, and a yacht, in the names of others.” Besides facing “a period of supervised release, restitution, and monetary penalties,” the DOJ explained:
“McAfee engaged in a practice known as ‘scalping,’” which “generally allows promoters to sell their securities holdings quickly and profitably through market interest that they deceptively generate, and violates the federal securities laws,” the SEC described.
Do you think McAfee should get away with ICO pumping and tax evasion? Let us know in the comments section below.