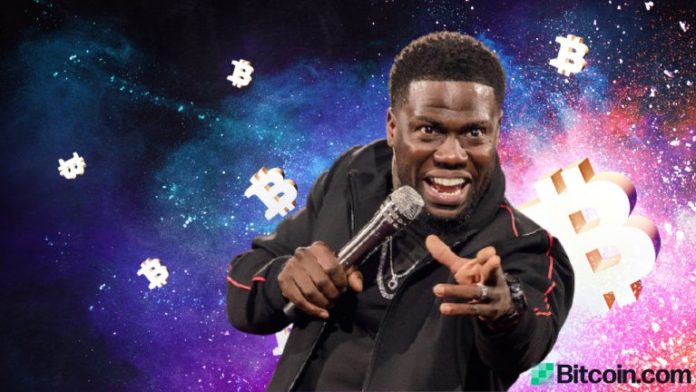 While Hart’s bitcoin stunt was most likely staged and his voodoo comment a joke, the crypto community views the event as very bullish and appreciate the exposure Hart brought bitcoin when he announced to a worldwide audience that cryptocurrency is a legit investment.

Kevin Hart Shouts Out About Bitcoin and Cryptocurrency

Popular actor Kevin Hart gave bitcoin a boost this weekend during an all-star telethon to benefit the Muscular Dystrophy Association (MDA). Hart told viewers that cryptocurrency is a legitimate investment right after he called it “voodoo money.”
Hart promptly responded: “I don’t take that voodoo money, we don’t take the voodoo, okay, so if you’re out there trying to give us the voodoo money…” While ranting on about bitcoin being voodoo money, he was interrupted by someone in his earpiece who set him straight. Hart then exclaimed:
Currently, eight cryptocurrencies are accepted by the MDA through the Giving Block. They are bitcoin (BTC), ether (ETH), litecoin (LTC), bitcoin cash (BCH), zcash (ZEC), Gemini dollar (GUSD), basic attention token (BAT), and chainlink (LINK). Donors can also request additional cryptocurrencies. The telethon raised ,548,454 during the evening but donations continued to roll in after the show. The organization has not disclosed how much cryptocurrency was donated.
What? We do take the voodoo … I’ve been told that we actually do take cryptocurrency. I’m being told that it’s a legitimate investment that’s worth almost 0 billion.

What do you think about Kevin Hart’s bitcoin shoutout? Let us know in the comments section below.

American comedian, Hollywood actor, and producer Kevin Hart shouted out this weekend that bitcoin and other cryptocurrencies are legitimate investments during an online fundraiser he hosted for the benefit of the Muscular Dystrophy Association (MDA) and his Help From the Hart charity. The inaugural MDA Kevin Hart Kids Telethon, aired on Saturday, is the first telethon in six years for the MDA. The last host was famed comic and actor Jerry Lewis who died in 2017.
The event lasted over two hours and participants included many other celebrities, such as Leslie Mann, Josh Gad, Don Cheadle, DJ Khaled, Jack Black, Cindy Crawford, David Beckham, Usain Bolt, Robin Thicke, Adam Devine, Kelly Rowland, Michael B. Jordan, and Bryon Cranston. Hart himself has been in many movies and TV shows; he has 88 acting credits and 36 producer credits, according to IMDB.
Bitcoin.com is author of this content, TheBitcoinNews.com is is not responsible for the content of external sites.
During the telethon, actor Jay Ellis who helped man the phones supposedly got a call from someone asking about whether donations can be made in cryptocurrency. Ellis asked Hart: “Hey Kev, I’ve got someone who wants to know if we do bitcoin, ethereum, or any cryptocurrencies.”

The post Kevin Hart Learns Bitcoin Is a Legit Investment, Not ‘Voodoo Money’ in an All-Star Telethon appeared first on Bitcoin News.