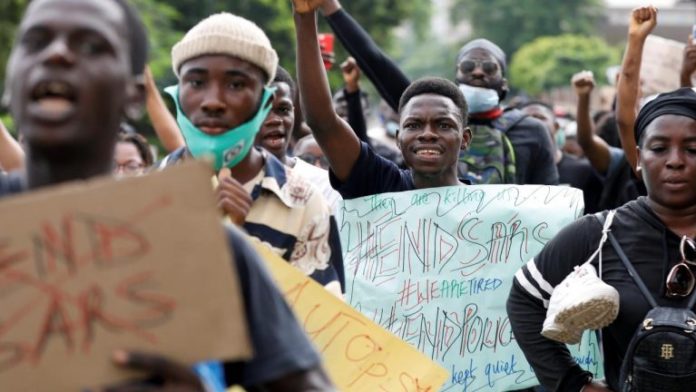 Meanwhile, Jack Dorsey tweeted in support of the Feminist Coalition on October 14. In his tweet, Dorsey urges his followers to “donate via bitcoin to help #EndSARS.”
The post Nigeria Protest Group Asks for Bitcoin Donations After Regulators Blocks Bank Account appeared first on Bitcoin News.
Bitcoin.com is author of this content, TheBitcoinNews.com is is not responsible for the content of external sites.

Before the blockade of the bank account, Feminist Coalition says it had used donations raised through the account to fund 90 protests across the country. By closing the bank account, authorities are attempting to suffocate a movement whose success has brought the spotlight on crimes committed by security forces.
An announcement on Sunday, October 11, 2020, by the Director-General of the Nigerian police that the SARS would be disbanded, has seemingly failed to appease protesters. One protest supporter, who did not wish to be identified, told news.Bitcoin.com the situation on the ground remains tense. She said reports of brutality and killings by the same unit are continuing.

By asking for bitcoin donations, Feminist Coalition is confident funds for bankrolling the protests will continue to flow as Nigerians are already familiar with cryptocurrencies. Nigeria is already Africa’s largest cryptocurrency market and many in the country use digital assets like bitcoin and Dash to make payments.

Meanwhile, in a post on Twitter, the Feminist Coalition urged Nigerians to donate via bitcoin since two of its donation channels were now blocked. The post said:
Flutterwave, a Nigeria payments gateway, which kickstarted the initiative to raise funds to pay for medical bills of those injured in the protests, appeared to have caved in to pressure from the government. Flutterwave’s unconfirmed decision to close the Feminist Coalition’s donation link is corroborated by reports that company executives were recently summoned by the Central Bank of Nigeria (CBN).
The protests, which are fronted by Nigeria’s tech-savvy youth, seek an end to brutality and corruption within the country’s police force. In a statement, the youth say they “also want a psychological evaluation & retraining (by an independent body) of all disbanded SARS officers before they are redeployed.”
What do you think of this decision by the Feminist Coalition to ask for bitcoin donations? Share your views in the comments section below.
A Nigerian protest group called Feminist Coalition is asking well-wishers to make donations via bitcoin after authorities reportedly blocked the organization’s bank account. Feminist Coalition is one of the many groups spearheading protests against alleged police brutality by a Nigerian police unit, the Special Anti-Robbery Squad (SARS).
For demanding an end to police brutality we are now under attack! Our bank account has been deactivated and so has the Flutterwave donation link. Our members’ lives are also being threatened.